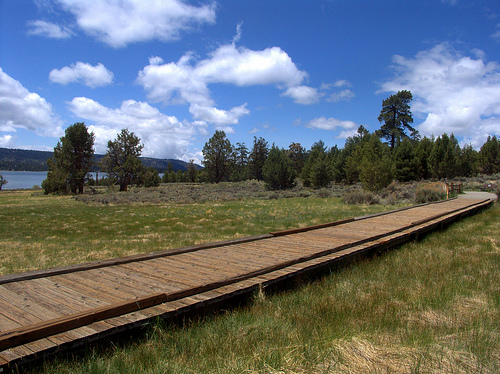 Written by John Emig of The Big Bear Grizzly

Using grant funds, and money from the U.S. Forest Service and the city of Big Bear Lake, the Alpine Pedal Path on the North Shore will get a much-needed makeover.

Mayor David Caretto cast the lone vote against the project, citing his long-standing objections to spending city money on projects outside the city.

In their decision to approve the expenditure of city funds, the rest of the council agreed that, despite its location outside city limits, the Alpine Pedal Path is an asset to the city as a tourist destination.

Plans call for work to rehabilitate the pedal path during the summer with completion in the fall of this year.

The Alpine Pedal Path is located on Forest Service land on the North Shore. Easily accessible for hikers, cyclists, skaters, joggers, strollers and wheelchairs, the Alpine Pedal Path is a paved path that starts at Stanfield Cutoff and ends at the Big Bear Solar Observatory for a total of 2.5 miles. Along the North Shore there are main access points at Juniper Point, Stanfield Cutoff, the Big Bear Discovery Center and Serrano Campground.